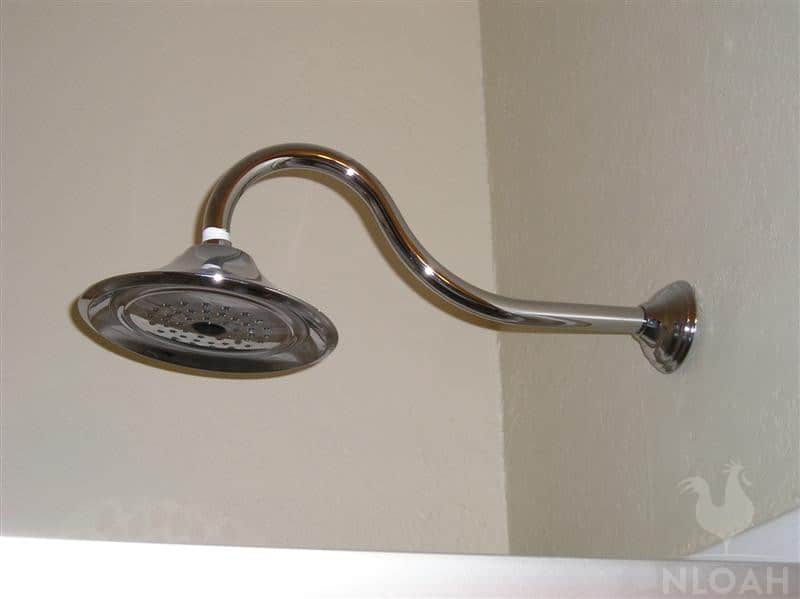 Wanna know how we got our GORGEOUS Brizo luxury shower head? You’ll never guess where it came from…

You ready for this?

That’s right. It came out of a dumpster! Can you believe that? Brand New, not a thing wrong with it, out of the dumpster! An over $400 fixture!!

We sorta have an advantage though… my husband works for a plumbing supply company. You would not believe the stuff they throw away!

And my husband, my who-cares-what-others-think husband, has no bones about pulling stuff out of the business’ dumpster. Boy do I love that man! His co-workers tease him. They call him White Fred (Sanford and son). But he doesn’t care! He even made his phone’s ring tone the theme song from Sanford and Son. (He’s such a goofball!)

He is all the time bringing home stuff he has rescued from a landfill. He has brought home two brand new bathtubs, several sinks, a toilet and toilet parts, lots of faucets, two office chairs, a nice trash bin that slides out from inside the cabinet…

But when I saw this beautiful shower head in his hands I was in love. Okay, well, maybe it wasn’t LOVE at first sight. I have to admit that I did contemplate selling it when I heard what it was worth. I did so love the idea of showering under a gentle waterfall though!

So… we kept it. Along with one other really nice brushed nickel spray faucet I put in our garden tub. (I’m sure it’s really for a kitchen sink, but I loved that the whole spout pulls out, making it easier to spray the kid’s hair off in the bath!)

We were also able to bless his mother with a gorgeous long necked copper kitchen faucet. (She’s been wanting something like that for a long time!)

So, what’s my point in sharing all of this?

Well, a while back I heard about a group of people called Freegans. Have you heard of them? They are people who go dumpster diving, er… “Urban Foraging”… to see what they can find.

I watched a documentary about them. You would not believe how much good food and useful things are just tossed into our dumpsters!

It made me want to dumpster dive. Really, it did.

It’s such a shame to see so much good stuff being wasted. I haven’t worked up the nerve to go rummaging through the trash behind a busy business though.

Maybe if somebody went with me… I do think it would be fun though! Think of how exciting it would be to find some awesome treasures!

These Freegans, they were finding sealed boxes of food that hadn’t even expired yet, cans of veggies that were slightly dented, shrink wrapped produce with a slight blemish… it was unbelievable!

Some of these people never even go to the grocery store, they just live off of what they find.

And these aren’t homeless people either. Some of them were college professors and doctors. They aren’t “foraging” because they can’t afford to buy groceries.

They do it to make a point of how incredibly wasteful Americans are. It is, on their part, an effort to reduce what is being sent to our landfills.

Man, I wish I had the nerve!

Though I don’t dumpster dive (yet!), we do have access to some food that would otherwise be tossed.

My husband also works part time for a food distributor, and often brings home stuff that they were just going to throw away. Stuff that hasn’t even expired yet! Mostly cookies, crackers, fruit snacks for the kids…

It’s junk food, but it’s free! There’s no way we could (or should) ever eat it all, so we give it to our church to help with snacks.

So, I’m wondering what you guys think about all of this? Have you ever scored something from someone else’s trash? Would you ever dumpster dive? I wanna hear from all you Freegans!! Tell us what you’ve found!