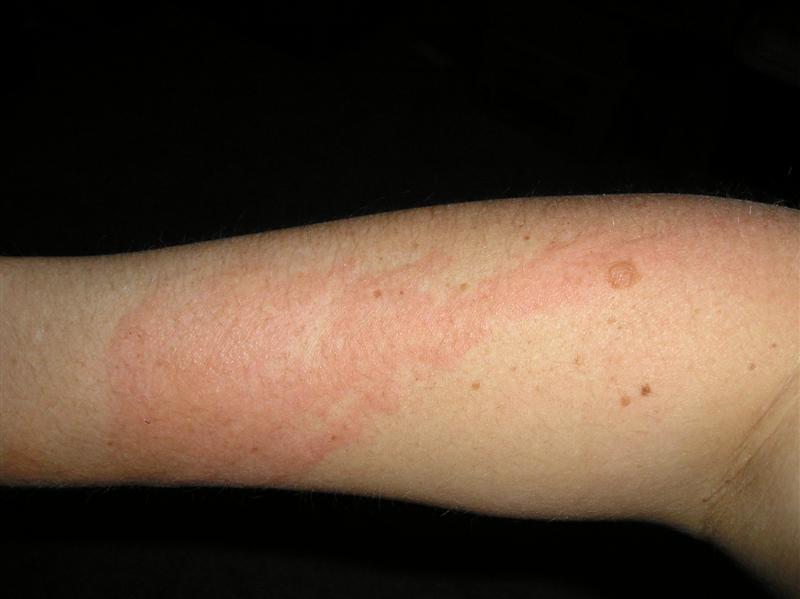 I don’t know how I got it… maybe from petting the goats, but I have broken out with a terribly itchy poison ivy (or poison oak) rash, and it was driving me nuts!

I didn’t want to use Cortisone or other steroid creams to treat the itching. So, I found a natural product that works wonders for the irritation: Tea Tree Oil!

I’ve been applying it with a cotton ball several times/day, and it has been a tremendous help! After just one day the rash is looking much much better, and the itching is relieved for several hours.

My friend Mrs. Addy also swears by Plantain. It grows in her yard like weeds, so she uses it for lots of things. For poison ivy, she makes a tea to drink from the Plantain leaves, and she also rubs a fresh leaf directly on the rash.

What Causes a Poison Ivy Rash?

Summertime is awesome, but you know what isn’t so awesome?
Poison ivy.

Unfortunately, this plant can be found just about everywhere. Also known as eastern poison ivy or toxicodendron radicans, this eastern North American and Asian flowering plant is known for its ability to cause contact dermatitis in people who come into contact with it.

It’s not technically an ivy but is instead a member of the pistachio and cashew family. It is weed that you definitely don’t want around! It’s found in wooded aeras, typically along edge areas right where the tree line starts to break and allow sunlight through. It can also be found in open fields, rocky areas, and disturbed areas.

When you come into contact with poison ivy, there’s about a 75% chance that you’re going to have an allergic reaction to it. There is a lucky quarter or so of the population that doesn’t have any kind of reaction to poison ivy at all, but there are some people who have worsened reactions the more often they are exposed to poison ivy.

Poison ivy contains a chemical named urushiol. It binds to your skin on contact and causes severe itching and other symptoms.

There are plenty of other plants that can cause painful rashes, too, including stinging nettle, poison oak and sumac, wood nettle, and giant hogweed.

There are certain activities that put you more at risk for a poison ivy encounter, too, including farming, landscaping, forestry, gardening, camping, or fishing.

Symptoms of a Poison Ivy Rash

A poison ivy rash will generally last for about five to twelve days. If you have an extreme case, though, it could last more than a month.
When you come into contact with poison ivy, you’re going to have several seriously unpleasant symptoms. These include itching, discolored bumps, red inflammation, and eventually blistering.

Poison ivy rashes are rarely serious, but there are some issues that can develop.

For example, if you burn poison ivy and then accidentally inhale the smoke, you can get a rash on the inside of your lungs.

This can cause pain and even respiratory failure. Eating poison ivy can cause damage to the mouth and digestive tracts, too.

When you get a poison ivy rash, it will often be in a straight line because of the way it brushes against your skin.

However, if you came into contact with pet fur or clothing that had urushiol on it, your rash may be more spread out.

You can also transfer the oil to other parts of your body with your fingers, but most reactions develop within 12 to 48 hours of exposure.

Use Rubbing Alcohol and Soap

As soon as you get inside after being exposed to poison ivy, wash up with cold water, soap, and rubbing alcohol. This could remove the urushiol from your skin and prevent a reaction.

Interestingly, some people say you can prevent poison ivy rashes by making a mash out of the jewelweed plant. There aren’t a ton of studies proving this, but it’s definitely worth a try!

An easy way to treat a poison ivy rash and relieve some of the itchiness is to make a paste out of baking soda.

Simply place a half cup of baking soda into a warm bath. If you don’t have time to take a bath, make a paste with baking soda to relieve the itching and swelling.

Banana peels are often used as an old wives’ tale kind of remedy to heal poison ivy itching. However, banana peels contain a ton of vitamins, so it makes sense that they might be able to help heel itching, too.

Just as you would use aloe vera for a sunburn, you can also use it for a poison ivy rash. You can use the inner part of the plant or you can buy a specialized ointment to speed up the healing of your rash, too.

Cool as a cucumber, right? Using cool slices of cucumber can help calm the itchiness and irritation in your skin. You can place slices of the vegetable on the area or mash it up to make a paste.

Apple cider vinegar is an astringent that can easily be used to relieve poison ivy rashes. You can use undiluted vinegar or you can dilute it first, but it might be a good idea to test it out on a small area of your skin first, to see if it causes irritation.

Soak a cotton ball in a teaspoon of apple cider vinegar. Apply it to the rash and do this several times a day. You may want to avoid this option if you have open blisters, as it can sting and irritate the wounds.

Prevent Getting a Rash

One of the easiest ways to treat poison ivy is to not get it at all! Obviously, knowing how to identify this plant is key (leaves of three, leave it be, right?). however, bear in mind that poison ivy oils can remain active for many years.

Even if you’re handling dead vines or leaves, you could still have a reaction. Be careful about oils that were transferred from the plant to other objects, too, like pet fur and tools.

Wear protective clothing when you’re outside and if you can, get rid of poison ivy by using a herbicide. If you have a pet and think he may have been exposed to poison ivy, use a soap to wash the residue off your pet’s fur.

A cold compress isn’t going to heal your rash by any means, but it can definitely help soothe some of the itchiness. Apply a cold compress to prevent you from scratching.

Like apple cider vinegar, this one is going to sting! However, if you’re feeling brave, you may find that lemon juice helps to draw some of the toxins out of your skin and speeds healing.

Apply lemon juice as soon as possible after coming into contact with the plant. It can help prevent all the oils from getting into your skin and causing irritation.

Soaking in an oatmeal bath is a great way to calm itchy, irritated skin of all kinds – but especially that which is related to poison ivy.

Simply grind up a cup of oatmeal in your blender until it’s a powder, then pour it into an old stocking. Knot it, then drop it into your bathtub. You can also apply an oatmeal paste directly to your skin for soothing relief.

Make a Cup of Java

Make a paste out of coffee and baking soda (cold coffee, of course). Apply it to your blisters to help calm the skin and expedite healing.

Witch hazel is an astringent made from the bark of the witch hazel tree. It can relieve the itching of a poison ivy rash and hep bring swelling down.

Turmeric is a powerful anti-inflammatory. You can make a paste with turmeric and equal parts of lemon juice and apply it to the affected area to help speed up healing and prevent further infection.

It sounds kind of disgusting, but potatoes are also powerful anti-inflammatory ingredients. Use it as a home remedy to heal poison ivy by whipping it into a paste and spreading it on your skin.

Bentonite clay is used in a ton of personal care and beauty products. You can make a paste of of water and bentonite clay to help prevent symptoms from worsening.

What Not to Do

Some people believe that scratching a poison ivy rash will spread the rash to other areas of the body. That’s not the case.

The oozing blisters are not oozing poison themselves but just fluid that your body is producing as it attempts to rid itself of the toxins. If your rash starts to spread, that’s because some of your body received more of the poison and are reacting sooner.

You should avoid scratching, though, because it can irritate the blisters and cause you to develop a secondary infection.

Try Not to Spread Urushiol

Often, people unknowingly spread urushiol inside their homes, on door knobs, and in other surfaces. This can cause you and others in your family to repeatedly come into contact with urushiol and experience more rashes. If you know this has happened, wipe down the surfaces you touched with bleach.

Do I Need to Go to the Doctor if I Have a Poison Ivy Rash?

In most cases, you do not need to go to the doctor for poison ivy treatment. However, if you develop any of the following symptoms, it’s time to get yourself checked out:

In extreme situations, a doctor might prescribe you corticosteroids to be applied to the skin or taken by mouth.

You can always turn to less natural treatments, too, to help you get through your hard times with poison ivy.

For example, there are lotions made out of calamine and hydrocortisone that you can by over the counter to help heal your itchiness.

You can also take an oral antihistamine, which can lessen the duration and severity of your body’s allergic response.

Well, the Tea Tree Oil was working well for me, but I ran out of it. I decided to try another remedy I’d heard of… a banana peel. So at breakfast I ate a banana, then wrapped the peel around the rash for just a little while.

It did relieve the itching, and for the rest of the day it didn’t bother me anymore. The next day the rash was all dried up, and it hasn’t bothered me since!

Next time, I’ll go straight to the banana peel and see if it works that quickly again.

Do you have a favorite natural treatment for Poison Ivy?? I’d love to hear it!

"Hi! I'm Kendra. I'm a wife, mother, and homesteader. I love everything that has to do with simple living. I'm a canning instructor, an avid gardener, and a constant learner of old-fashioned skills. Here is where I share it all. Welcome to the adventure!"
How To Use Lemon Balm
Help! My Fingers Are On Fire! How To Cure A Hot Pepper Burn
3 Step-By-Step DIY Dry Shampoo Recipes