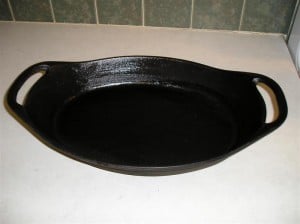 Meet the newest edition to my cast iron cookware… a beautiful Lodge casserole dish! My good friend Addy was so kind to bless me with it, after going on a little vacation recently with her hubby and visiting a Lodge Cast Iron Outlet. She told me that this is one of her favorite pieces, and when she saw them on clearance and found out they are being discontinued, she so generously snagged one for me. How great is that?!

At first I wasn’t sure what it was used for. I asked Addy’s oldest what they cook in it and she told me, “Sonker!”. What did she say? I made her repeat herself, making sure that I didn’t just misunderstand her, and then I had to laugh and ask what “Sonker” is. At first she could not think of another name for it and she thought for a moment. I asked, “What’s in it? Is it like potatoes or something?” She said, “No, it’s like fruit with crust on top…” I said, “Oh, like a cobbler?” Her eyes brightened as she smiled, “Yeah! That’s it. Cobbler.” It was funny. I guess this is what they called it where Addy grew up, and the name just kinda stuck.

Later I asked Addy how she makes Sonker. She said that all it is is some kind of fruit (like apple slices, blueberries, strawberries… anything) placed in the bottom of the dish with a little butter, and then you drizzle a crust mixture over the top. The mixture is just: 1 cup flour, 1 cup sugar, and 1 cup milk. Sometimes they add 1 1/2 tsp. baking powder to it to make it rise a little more. And bake it till brown. They cook theirs in their water stove sometimes. Yummy!

Addy gave me a good tip: whenever cooking something sugary in cast iron, she lines it with foil first. Otherwise it leaves a crystallized type film on the pan ’cause it absorbs the sugar, and it’s hard to clean off.

So, now I’m all ready to pop it in my oven and make my own Sonker. I’ll let you know how it turns out!

*UPDATE: It turned out yummy!! And very easy to make.

1 thought on “My New Cast Iron Dish- For Making… Sonker?”

"Hi! I'm Kendra. I'm a wife, mother, and homesteader. I love everything that has to do with simple living. I'm a canning instructor, an avid gardener, and a constant learner of old-fashioned skills. Here is where I share it all. Welcome to the adventure!"
How To Dry Herbs
Mugoyo: Sweet Potato and Bean Loaf Recipe
How To Make Stevia Extract
How To Freeze Shredded Zucchini For Quick Breads
Essential Homestead Kitchen Tools