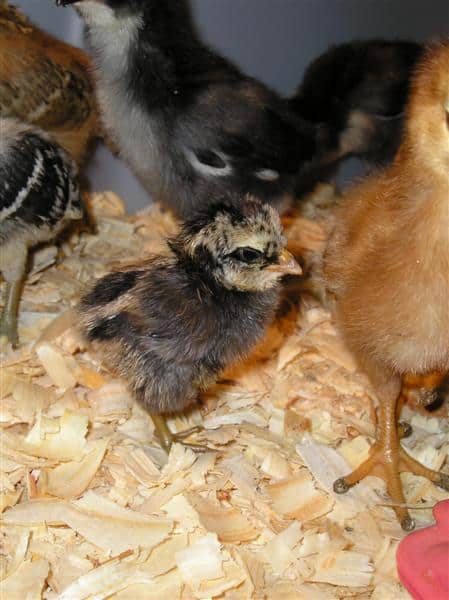 This poor little mixed up chick. She’s been moved from here to there and everywhere during her short week of life.

It all started when this mama hen decided she was tired of waiting on her last two eggs to hatch, and left the nest with her babies in search of food. (See the little chick peeping out from behind her wing? She has six under there.)

The two eggs sat alone for two days before a little boy discovered them. In his curiosity, he began to crack them open. When his mother (uh-hum, me) realized what he was doing, she quickly rescued the remaining egg from its captor, and snuck it under another hen who was already sitting on a full clutch.

After two or three days, we were all surprised to find that the chick had actually hatched out! I was afraid to move it during its first days, so I left it in the nest. On the third day, I took it from a very protective adopted mama, and put it in the run with the chick’s real Ma.

The black hen was so funny. She cocked her head and eyeballed the peeping little one, and then got close enough to nip it a bit to taste its feathers, as if wondering if it was hers or not. She looked very confused.

After a moment of investigating the new chick, she fluffed her feathers, called her roaming babies, and sat down with them all huddled underneath her.  The baby chick didn’t know what to do, so it just stood a foot away from the hen, peeping alone. I hoped it would find its way underneath the hen with the others, but it didn’t. Feeling sorry for it, and worried it might get cold, I put it back in the nest with the other hen.

For those who don’t know, a hen will leave her nest after about three days to help her chick find food. The clock was ticking. It was time for this chick to get out, but I didn’t want the hen to leave the dozen eggs she’d just started sitting on.

After speaking with a good friend, she advised that the best time to move a chick under another hen is at night. The chick will be covered in the scent of the mama by morning, and she won’t be able to tell it from her others. So, I planned on doing just that at nightfall. But by the time the sun had gone down that night, there was a terrible thunderstorm going on outside. I hated to wait, but I definitely didn’t want to go out in that weather.

The next morning, I went out to check on everyone. When I went into the coop the nest was empty. The chick was gone! There is about a four foot drop from the box to the floor. How did she get out? Did she fall, is she hurt?

I went out to the run where all of the chickens had congregated. Even though all of my Buffs look identical, there was one in particular that was sitting on the ground, all fluffed up and content. I knew she was the broody. I walked over to her, speaking a soft hello. She raised up, feathers puffed out in aggravation, and sure enough, the little chick came stumbling out from under her. It was fine! I picked it up and decided I’d have to put it inside in the brooder with my mail-ordered chicks.

I hoped that in the absence of the baby, the broody hen would return to her nest. And a little while later, that’s exactly what she did.

The poor baby. She was half the size of her new friends. I was afraid they’d pick on her, but they didn’t mind her addition. And although she’s had to scurry through giant feet to avoid being trampled, she’s held her own.

And after settling in, she found her companions to be quite snuggly and warm.

Meanwhile, the guineas in the incubator had been hatching! Last night, they were ready to move to a brooder as well. After putting the three guinea babies in their new, warm box, I decided I might move the baby chick in with them, since they are closer to her size.

I placed the baby chick with the guineas and watched to see what would happen.

Taking one look around the new digs, she quickly decided she did not like this place. She missed her buddies!! She sat herself down, and peeped as LOUDLY as she could. PEEP! PEEP, PEEP!!

I took the hint and put her back with the others. Silly thing.

So, I guess this is where I’ll keep her until she’s big enough to be put outdoors. This is one tough little chick for roughing it through so many transitions! It’ll be fun to watch her grow.

12 thoughts on “Mixed Up Chick”