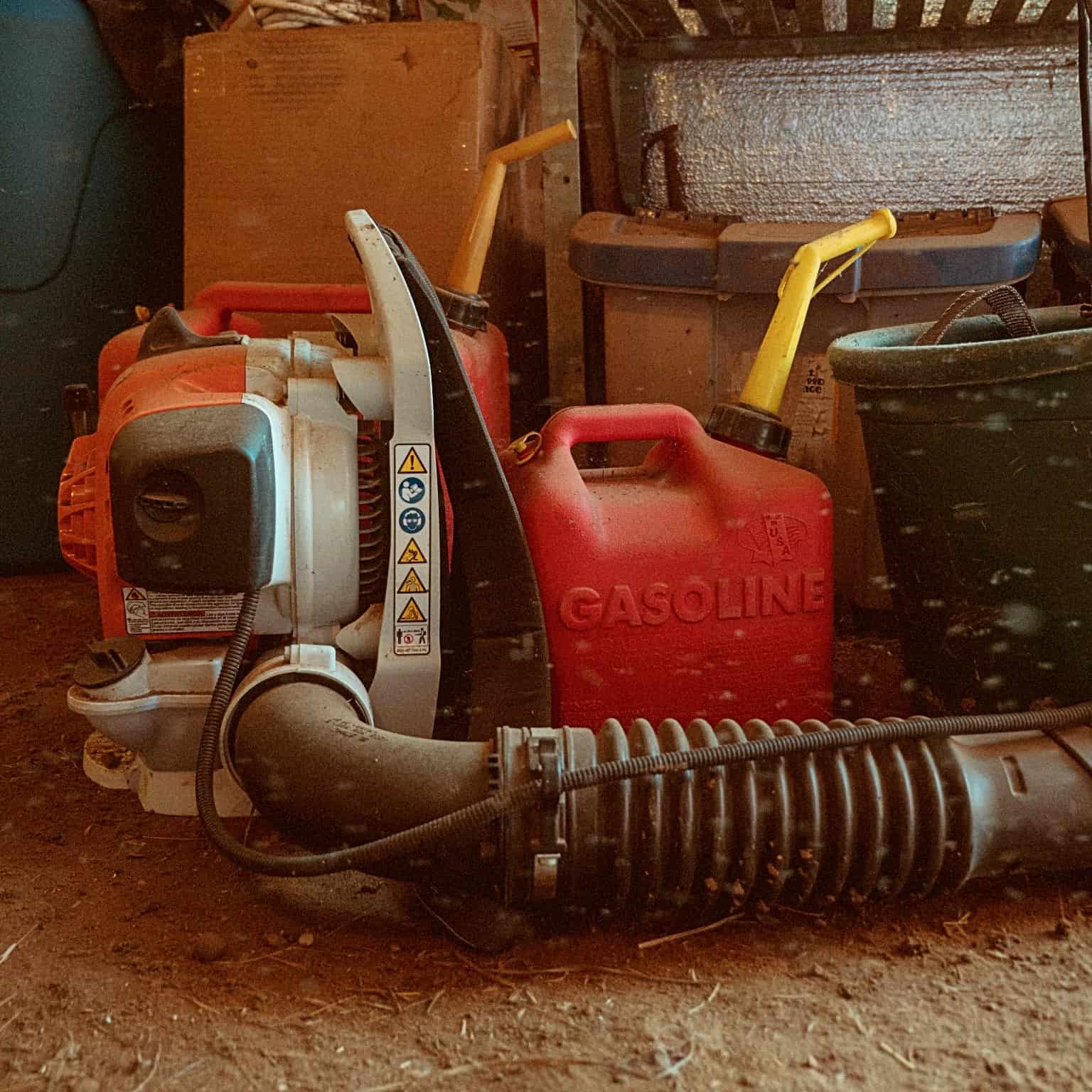 If you live on a hard-working homestead, chances are you have plenty of vehicles and other machines that use gasoline to run.

Smart homesteaders will always keep a good supply on hand so they don’t get caught short at a critical moment.

However, it rarely fails that some stored gasoline, either in a can or a barrel, will be forgotten in the hustle and bustle of everyday life.

When you remember it, or even worse, when you need it you find out that the gasoline is old, cruddy, and probably unusable. Tough break when you need to fuel up and get back to business!

It’s just the way things are. All gasoline but particularly our modern gasoline will break down over time, lose potency and eventually fail to function in the engines that use it.

But, with the right know-how and a little bit of luck, it is possible to recondition old gasoline and bring it back to life where it will work nearly as well as new in an engine.

This article will tell you how and everything else you need to know about the process.

Most of the time, when you think about spoilage you probably think about food, not fuel, but the fact is that gasoline can spoil when stored too long.

It’s true, and it is a major bummer when it happens to you because it will cost you money, in the form of the lost gas, and more importantly, will usually cost you time.

In a worst-case scenario, the bad gas could damage or even destroy an engine you put it in.

Pretty serious stuff and something you can ill afford, so you’ll need to stay on top of checking and rotating gasoline. But what happens to gasoline that goes bad?

Well, that really depends on what type of gasoline you are dealing with. All gasoline is not created equal, you know.

If you’re dealing with typical gasoline that you buy throughout most places in America from your corner fuel stop, you’re probably dealing with an ethanol-gasoline blend.

Say whatever you want about this stuff, all you need to know for now is that it will not keep for a very long time at all.

Generally, you’ll get about 3 months’ worth of shelf life from it, maybe a little longer, and that’s it.

That’s because it readily absorbs moisture, ruining the gas, and also because the ethanol components will separate in the mixture.

On the other hand, you might have genuine, “pure” (mostly unadulterated) gasoline.

This is a much better bet for long-term storage if you can find it and you’ll usually get between 5 and 8 months’ worth of storage time out of it.

Even so, this gasoline too will break down and spoil over time, because the volatile compounds that give gasoline its power as fuel will decay.

Now, I tell you this so that you understand that all gasoline, every kind, no matter what, will eventually go bad in storage.

The trick is understanding whether or not the gas is just old and can be reconditioned, or whether it is beyond saving.

Figuring Out if your Gasoline can be Reconditioned

Now, we get to the important part. This is where the rubber meets the road. Your gas might be old, very old, but it might not be truly bad as in beyond saving.

But then again, it could be, and every attempt that you make to save it will be futile and waste time and materials.

Take this seriously, because the life of your engine might be on the line. There are two factors that can affect your gasoline and render it beyond saving: these factors are contamination and phasic separation.

Contamination is exactly what it sounds like, contamination by foreign matter that shouldn’t be in the gasoline.

This could be water in the form of condensation or particulates like rust, sediment, silt, or something else.

A translucent or opaque appearance, “milkiness,” cloudiness for the visible presence of particles floating in the gasoline is an obvious sign of contamination that will likely render it beyond saving.

Phasic separation is something else. This is where the components of the gasoline, present in ethanol gas blends, begin to un-blend.

If you notice anything that looks like oil floating on water or a distinctly tiered appearance and color and density, your ethanol gas has separated and likely cannot be saved.

Phasic separation in particular is also an indication that the gas is contaminated by water, meaning you shouldn’t use it at all.

If the gasoline in question appears either way as described above, I recommend you don’t waste your time trying to recondition it. Dispose of it properly, and get yourself some new gas.

Okay, you have assessed the gasoline question and determined that it is not contaminated with particulates, water or has undergone phasic separation.

Maybe it just appears a little darker than normal. That’s okay, and likely means the gas is just a little old and is a good candidate for the reconditioning process.

Below is our step-by-step guide for reconditioning gasoline. But before you begin, you’ll need some supplies:

That’s really all you need. Now, let us move on to the steps below.

I promise I am not selling you short here. That is really the entire process, but since I am sure you have questions because it is deceptively simple, I’ll tell you what’s happening and why it works.

Remember when I mentioned above about those volatile components present in gasoline decaying and breaking down over time, and how that robs gasoline of its potency?

All you are doing when reconditioning gasoline in this way is mixing gasoline that still has those volatile components with gasoline that has lost them. That way, you are restoring the potency of the resulting mixture.

Now, we aren’t going to get into all the hard science of how gasoline is made and how the various trace elements and additives are vital to the function and performance of gasoline in modern engines designed for it. But suffice it to say that this process does work.

However, the octane rating of the resulting blend will be lower than that of the fresh gasoline you are adding.

Basically, the old gas is diluting or cutting the fresh gas with the higher octane rating, resulting in a lower overall level of performance.

This might be a problem for you, or it might not be depending on your engine and its performance characteristics.

Engines that don’t require a high octane fuel should run just fine, even if they do run a little bit rough or choppy.

However, I would think twice, and think hard, about reconditioning any old high octane or specialty fuel in this way that is intended for use and high-performance sport engines. You run a much higher risk of malfunctioning or even damaging the engine.

Can’t I Just Use those Reconditioner Additives I see Advertised?

You could, but they don’t have any advantage over adding just straight gasoline, and some of them are just snake oil.

Note, there are several different fuel additives on the market, with most of the good and legitimate ones being intended for adding to new, fresh gasoline to extend shelf life, not bring old gas back to serviceable condition.

Unfortunately, most of those reconditioner or restoration additives that claim to do so are nothing more than bottled petroleum distillates that you’ll get from adding new gasoline to the old stuff.

They aren’t magic, and they won’t do a thing to make contaminated gas or gas that has undergone phasic separation work again.

Remember, gas that has truly gone bad is beyond saving, by any means, and you shouldn’t waste your time or money trying to do so. Cut your losses and move on.

An Ounce of Prevention: Use Long Life Gasoline

You might think this is a little bit off-topic, but I beg, please hear me out. You can save yourself a ton of grief, a fair bit of time, and not a little bit of money if you will go out of your way initially to find and store long-life gasoline as part of your supply.

Sure, you could use the aforementioned fuel stabilizers and they do a pretty good job, but no fuel stabilizer will last as long as refinery-produced long-life gasoline.

These specialty grades, though increasingly difficult to find, have a shelf life of at least a year right out of the pump, and maybe as much as 2 years!

That is truly exceptional, I don’t care who you are. And even though it is pricey, once you locate it most suppliers of this gasoline will offer it in a variety of octanes with other additives to suit any purpose or work in any engine that needs gas.

Thankfully, it is a lot easier to find this stuff today than in years past. All you need to do is hop on the internet and run a Google search for gasoline suppliers in your area who offer it.

Stashing this stuff in a great can or barrel that will help to prevent the ingress of water and other contaminants will give you maximum shelf life and greatly reduce the chances that you’re gasoline will go bad before you use it, or that it will be bad by the time you remember it!

Especially if you are storing a large quantity of gasoline for a rainy day or anticipated shortages, this stuff is the very best.

Older gasoline that is not contaminated and has not separated may be restored to serviceability by mixing in an equal part of new, fresh gasoline in a clean, approved container.

The resulting mixture will have a somewhat reduced octane rating, but it will function more or less normally in most engines.

You should never attempt to recondition gasoline that is badly contaminated or has broken down entirely, as engine malfunction or damage might result.

1 thought on “How to Recondition Gasoline Step-by-Step”