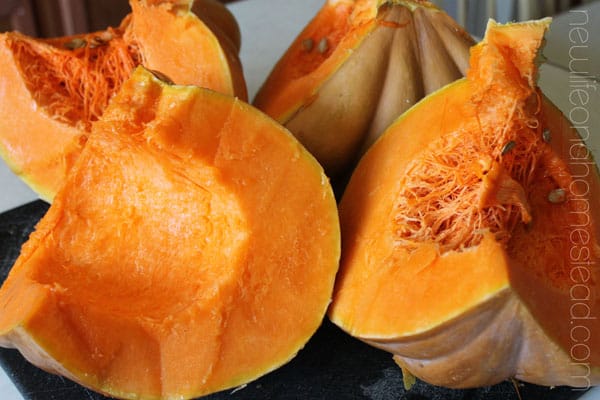 We grew two different varieties of pumpkins this year. A large heirloom from seeds a friend gave me, and small pie pumpkins. The large pumpkin’s vine died before the pumpkin (pictured above) turned orange, so we picked it green and brought it inside to cure. It took a couple of months, but eventually it turned a lovely pale orange.

That’s one thing I love about pumpkins. As long as you keep them dry and somewhat cool, they’ll last for several months before going bad.

Any time I am able to get my hands on a pie pumpkin, I puree it to freeze for future pumpkin breads and pies. I can remember the first time I was ever given a whole pumpkin. I had no idea what to do with it! It took a google search and a couple of articles before I gathered the courage to cook and process that first pumpkin. It does takes a little time to cook, peel, and puree a whole pumpkin, but man is it worth it.

Before you begin, you wanna make sure that you have a PIE pumpkin, and not a carving pumpkin. Pie pumpkins are usually a much paler shade of orange than traditional bright orange carving pumpkins. You can cook other pumpkins, but these in particular make the best pies and quick breads.

How to Bake a Pumpkin: From Start to Finish

Step 1: Cut the pumpkin in half or quarters, depending on how large it is. You’ll need a sharp butcher knife to get through that tough skin- be careful!

Step 2: Scoop out all of the seeds and stringy stuff. Save the seeds to bake them for a healthy snack. Or, if you grew an open-pollinated, heirloom variety (away from any other squash or pumpkin plants) you can save the seeds to plant more pumpkins next year.

Step 3: If working with a large pumpkin, cut pieces into more manageable slices. Place the pieces skin-side down in a pan with 1/2″ of water.

Step 5: Allow the pumpkin to cool, then use a knife to peel the flesh from the skin. If it’s really tender a spoon will also work. Place the peeled pieces in a large bowl as you work. Liquid will accumulate in the bottom of the bowl. Do not drain it off, you might need to add some of that liquid to the blender.

Step 6: Cut the pumpkin into pieces and drop them into a blender. If it won’t blend easily, add about 1 Tbsp of the liquid from the bowl to the blender.

Step 8: Fill freezer bags with the puree for future use. I freeze 2 cups at a time, ’cause my favorite Pumpkin Spice Bread recipe calls for 2 cups of pumpkin puree. Push out all of the air from the bag before sealing, and don’t forget to date and label it.

It’s pretty amazing to me that one big pumpkin would yield 30 cups of pumpkin puree! And all it took was one little seed.

Why Freeze It Instead of Canning?  The National Center for Home Food Preservation has put out a warning stating that it is not safe to can homemade pumpkin puree or pumpkin pie filling. It is safe to can pumpkin in cubes, but if you want it already pureed you should to freeze it just to be on the safe side.

Once you have your pureed pumpkin, you might try canning pumpkin bread!

Now that you know how to bake and puree a pumpkin, what are you going to make with it?

11 thoughts on “How To Bake A Pumpkin, From Start To Finish”