Good Monday morning to ya, and welcome to the very first edition of the Homestead Barn Hop! Homesteaders from around the globe will be linking up with me, Amy, Jill & Megan, and sharing what’s been going on around their homesteads… I hope you’ll share what you’ve been up to as well!

I thought today would be a good day for me to share what we’ve been busy doing this past week.

We have so many projects to complete, it’s frustrating not being able to do them all at once and be done. But I guess that’s homesteading… a never ending job! There is always something else to do. Always.

We’ve been blessed with really nice weather over the past week, and have done our best to take advantage of it before cold weather sets in again. It has been incredibly tempting to start planting stuff in the raised beds with temps being in the mid 70’s, but our last frost isn’t expected until April, so I must be patient.

I’ve been using the sunny days to pull weeds from my garden area at least getting it ready to be planted in. I’ve found that weeding in the winter is SO much easier than weeding when things are turning green again. The roots pull right out without any trouble.

Starting seeds indoors has been a great way to somewhat appease the planting urge. So far I’ve got little onions, broccoli, lettuce, cabbage, and some flowers growing under a light on my kitchen counter. It’s just a plain old halogen bulb shop light, hung underneath my cabinets by a hook and chain, which I can lower and raise as needed. I see my broccoli looks a bit leggy (long and scraggly). I’m afraid it needs to be closer to the light; it’s supposed to be about three inches from it.

My husband worked on building some new nesting boxes in the chicken coop for the hens. No, they aren’t pretty. Yes, that’s graffiti you see on that wood. And yes, they were repurposed from free scraps of lumber, so we aren’t complaining!

We needed to make them a bit bigger for our Buff Orpingtons to lay in comfortably. We were hoping the over-hung roof, and a lip on the front of each box to hold bedding in would help to keep the new boxes clean. Unfortunately, the hens are STILL sleeping and pooping in the boxes instead of laying in them. *Sigh* So, we’re trying to figure out how to discourage that. Any suggestions??

We are also talking about taking some scrap vinyl flooring that we have and laying it in the chicken coop. The manure is beginning to rot and warp the plywood flooring. Covering it with something like vinyl would help, I think.

Again, this is homesteading. Constantly learning what doesn’t work, and trying to improve upon things to make them even more efficient.

Jerry has also been working hard at putting up a fence so we can try our hand at owning goats again. This time we’re gonna do it the right way and be ready before bringing them home!! My grandfather gave us an old tool shed of his, which Jerry has been re-assembling to make a mini “barn” for the goats. Ideally, one side will be their sleeping/birthing quarters, and the other side will be used for keeping food dry and for a milking stand.

If you look closely at the picture you can see a structure in the background. That’s a little playhouse Jerry has been building for the kids (lol, not goat kids, our kids). But now it’s in the goat’s pen. I wanted him to move it out, but he suggested that the goats might like to lay underneath its shade in the heat of the summer. When we had our goats before (free range), they always laid underneath my husband’s workshop building. So, I think he has a good idea. 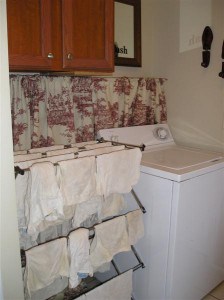 I sold the dryer on Friday, so I’m locked into my clothesline and floor drying rack now! But seriously, I’m loving hang drying everything. There’s just something therapeutic about it. Plus, I’ve enjoyed the unforeseen side-effect of not having clothes piled up on my couch ready to be folded. It’s so easy to fold things as I take them off the line, they end up being put away immediately. With a dryer, I could dry load after load and dump the clean clothes on my couch to be folded later. It was easy to get so many clean clothes piled up that it became an overwhelming chore to fold and put them all away. Now, I am limited to 2-3 loads per day, which is easily managed.

I’ve also been busy in the kitchen as usual. My little man turned 4 years old this month, and we had a birthday party for him over the weekend. Determined to stick to my goal of grinding all of our flour and not buying store bought, I found a whole wheat chocolate cake recipe to try. It turned out great (recipe to come)!! And it felt good serving a cake that was made from 100% fresh ground whole wheat, fresh eggs, fresh raw milk, fresh homemade butter, and homemade mayonnaise (that’s right, I said mayonnaise!). Not to mention the homemade butter cream icing, orange at Ty’s request. Yummmm. Much better than anything out of a box!!!

I’ve also been absolutely giddy over the weekend with the arrival of my new NutriMill electric wheat grinder!! I’ll be telling you all more about that this week too. But I will share this… I can completely imagine now how the housewife of way-back-when must have felt the first time she ever used an electric washing machine. “Honey, look at this… I just put the clothes in and press a button!! Amazing!!”

So, anyways, that’s what I’ve been up to, in a nutshell.What’s been going on around your homestead? Have you tried a new recipe you’d love to share? Learned a new trick we could all benefit from? Got a cool project you’d like to show off?

Link up, grab our button, and let us come visit your homestead!

16 thoughts on “Monday’s Homestead Barn Hop #1: This Week Around The Homestead”