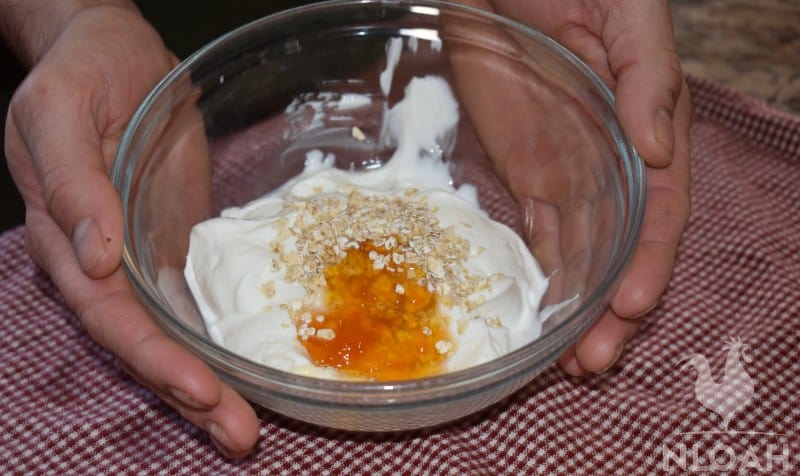 Me and the kids visited some of our homesteading friends the other day, and they were telling me how they make their own yogurt.

They explained how much cheaper it is than buying store bought containers, and that you don’t even have to have a yogurt maker to do it!

This whole time I thought I had to have some fancy machine to make the yogurt for me. So hearing how easy it is to actually make it, even from store bought milk, I thought I’d give it a shot.

Why You Should Make Homemade Yogurt

Yogurt has a ton of impressive health benefits. Not only is it loaded with beneficial bacteria (probiotics) that can improve your immune system and digestive functioning, but it’s also chock-full of protein and calcium, too.

Yogurt – whether conventional or Greek – is loaded with nutrients and is a healthy, low-calorie snack. Unfortunately, store-bought yogurt doesn’t always stack up to the homemade stuff.

First, poor-quality milk is often used to make commercial yogurt. The milk is generally produced from cows raised on concentrated animal feeding operations, so they may have health issues that are going to be transmitted to your yogurt, too.

Store-bought yogurts also tend to contain sugars, artificial sweeteners, thickeners, preservatives, flavors, and artificial colors, too. Really, all you need in yogurt is some milk and live probiotic cultures.

That’s it! Combine the health benefits with the ability to save a ton of money by making your own homemade yogurt, and doing so is truly a no-brainer.

Whether you choose to make your yogurt in an oven or in a yogurt maker is entirely up to you. Some people prefer yogurt makers because then their stoves won’t be tied up for eight hours at a time.

I prefer to make mine in the oven because it doesn’t require extra equipment and plus, I can set it in the oven overnight when it will be less of an inconvenience.

My favorite thing about making homemade yogurt? You really don’t need any fancy ingredients or expensive equipment in order to get started! All you need is a half gallon of milk and a half cup of yogurt.

Your best options for milk will be whole or 2%. This will yield the thickest, creamiest yogurt possible. However, you can also use 1% or fat-free milk if that’s what you prefer.

Greek and regular yogurt can both be used, but you’ll want to use plain, unsweetened, and unflavored yogurt if possible. Some people even use raw milk – this is something that is hotly contested, but it’s up to you, if you think it’s worth it.

The one thing you definitely do need to do is select yogurt that has “live active yogurt cultures” in its ingredients’ list. These help convert the milk into yogurt.

There are thousands of different types of cultures out there, but some of the most common ones found in yogurt are L. Acidophilus and Bifidus.

As for equipment, you’ll just need a large pot with a lid. A Dutch oven is what I used, but you could really use any kind of container. The goal here is that it will keep the milk warm and at a steady temperature.

You can also use a dehydrator or a yogurt maker to keep things at a consistent temperature, but I prefer the low-maintenance approach myself!

That night I pulled it out and it was nice and ready. It’s a little runnier than store bought, but that’s normal.

You can add powdered milk to it to make it thicker if you like. Otherwise, it tasted much like store-bought plain yogurt, which I don’t like very much by itself. It will be good for smoothies though!

So, here’s the breakdown:

So, we can definitely see that it’s much cheaper to make your own!!

Once you’re done enjoying your first batch of yogurt, make sure you save half a cup to use as a “starter” for the next batch.

You might notice some odd flavors in the yogurt after a few batches. It also might not culture as quickly. This means that outside bacteria is being harbored in your yogurt – or it can mean that the strain is weakening.

It will likely be safe to eat for one more go-around, but you may want to add some store-bought yogurt to get the cultures going again.

A few pointers for next time:

If your milk temperature drops below 110 degrees, don’t worry! It’s still safe. It might take a bit longer to set up and be a bit looser in texture, but otherwise it will still be fine.

If you are like me and don’t like plain yogurt, you can sweeten it with sugar, honey, ripe fruit, or jelly.

Do you make your own homemade yogurt? I’d love to hear how you do it, and any tips you may have!

12 thoughts on “How to Make Yogurt Without a Yogurt Maker”