One of our biggest fears when we purchased our solar kit was that we might damage the system somehow.

Several days ago, my husband was reading the output on our inverter and noticed that it wasn’t working as efficiently as it should be. We contacted the distributor we purchased it from, and he said the issue was likely due to the fact that we had the box mounted sideways. It wasn’t a terrible problem, but he said he could look at it and make sure it was functioning 100%. So, my husband took it back for them to test. After running some diagnostics, they said it looked fine and suggested that he mount the box upright instead of on its side when he got it back home. 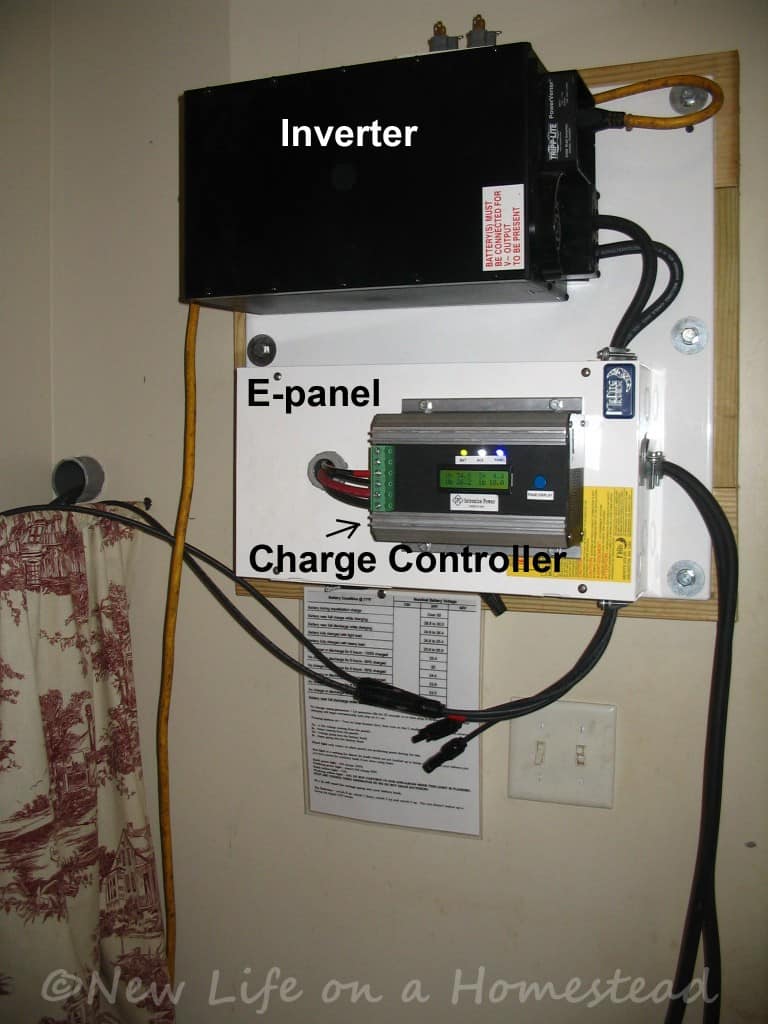 This entire wall unit needs to be rotated clockwise so that the inverter sits vertically instead of horizontally.

The next day Jerry went to work hooking it back up. We turned the mounting panel so that the inverter was upright as it should be. We screwed everything back into place (which isn’t easy because it’s really heavy). Jerry checked all of the breakers to make sure they were off, then connected the wires back together. Everything seemed to be fine until he got to the battery hookup.

He leaned forward to connect the system to the batteries, but as soon as the cable touched the battery terminal- sparks flew in the air, there was a bright flash of light and a loud POP! My husband let out a loud yell and stumbled back stunned by what had just happened. Fortunately, he wasn’t hurt, but he couldn’t see well for several minutes.

Turns out, one of the breakers was on. The way it had been labeled had confused him- in the “on” position, the breaker read “off”. He also had crossed a wire when connecting the unit back together. Not to mention, it was full daylight and the panels were getting a charge. It probably would have been better to do this at night when there was no juice running through it.

But that didn’t matter now. What mattered was that he was okay.

Now we had another problem.

This is what the battery terminal is supposed to look like.

This is what the battery terminal looks like now.

It had completely blown apart.

Was the system fried??

We took the inverter, E-panel, and charge controller back to the distributor… again. I swear we’re probably their worst customers ever. They took a few days to test everything out, and let us know that it all seems to be working properly.

Jerry was able to find a clamp to put over the battery terminal so that we could still connect the cables.

After getting the kit back, we once again held our breath and hooked everything back up.

And it worked! The fans started turning, the lights blinked and flashed, and the machine hummed to life.

That is… for about 2 days. And then all of a sudden it crashed.

Dead as a doorknob.

The batteries still have full charge, so it must be one of the components. Likely the charge controller.

So, our charge controller is off being tested. Fortunately it’s under warranty, so I think since nothing looked damaged the last time they looked at it it’ll still be covered.

All of this makes me glad we waited to disconnect from the grid until we knew for sure that we could get by without it. We would be in trouble right now otherwise.

Do I regret getting solar? No way. We’re still glad we made the investment. We just have to get over the learning curve.

Our friends tease us. They say they’ll just sit back and watch us make all of the mistakes before they buy their own solar kit. So far we’re doing a darned good job of demonstrating what not to do. That’s why I share this here, though. So that all of you interested in going off-grid with solar can learn from us as well.

29 thoughts on “The Dangerous Side of Solar”