Today was the first day that I saw beyond my own driveway in literally two weeks. Those of you who follow me on Facebook know that a while back we had some major rainstorms that flooded many areas, including our driveway. As a result of the rushing, rising waters, the bridge along our driveway was badly damaged.

The flooding was so bad that a big tree was uprooted from the creek bank and fell over the bridge. 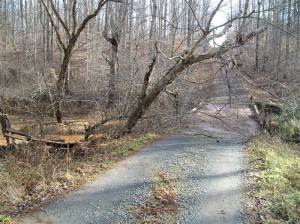 When the rain finally stopped, my husband and my dad grabbed their chainsaws and went to work clearing the tree away. They had just finished up and were walking from the bridge back to their trucks when the ground began crumbling behind their steps and a huge sink hole appeared! 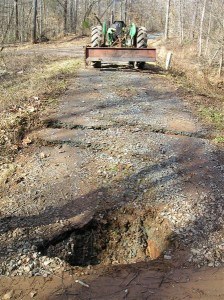 Man, they were lucky nobody fell in! The ground cracked and sank several feet in front of the bridge. My dad drove his tractor down to  scrape some dirt back in to fill the holes.

The concrete retaining walls on either side of the bridge are badly cracked. It’s not pretty. And it’s gonna be very expensive to fix. So, for now, we just have to do the best we can with what we have.

Every day the bridge is sinking a little. We used to be able to drive along the driveway straight across the bridge to the other side. Now, there is a 2-3 ft. drop from the driveway to the bridge. The slope is so steep that our truck bumper is scraping every time my husband drives across.

And this is why I’ve been stuck here for two weeks. My van cannot make the steep drop to cross the bridge… not without losing a bumper. And with the bridge sinking, and even slightly twisted at an angle, I’m not so sure how safe it is to be driving across.

But today, we all loaded up in the truck and I finally got to see civilization again as we went out visiting family. You would think that one might begin to go crazy after being stuck in the home for so long! But not me. There is too much to do here to even think about it! And it’s a good thing I don’t mind being here… ’cause I have no idea how long it will be before I can leave on my own again!!

Print or Save this article as PDF
About Kendra 1035 Articles
A city girl learning to homestead on an acre of land in the country. Wife and homeschooling mother of four. Enjoying life, and everything that has to do with self sufficient living.